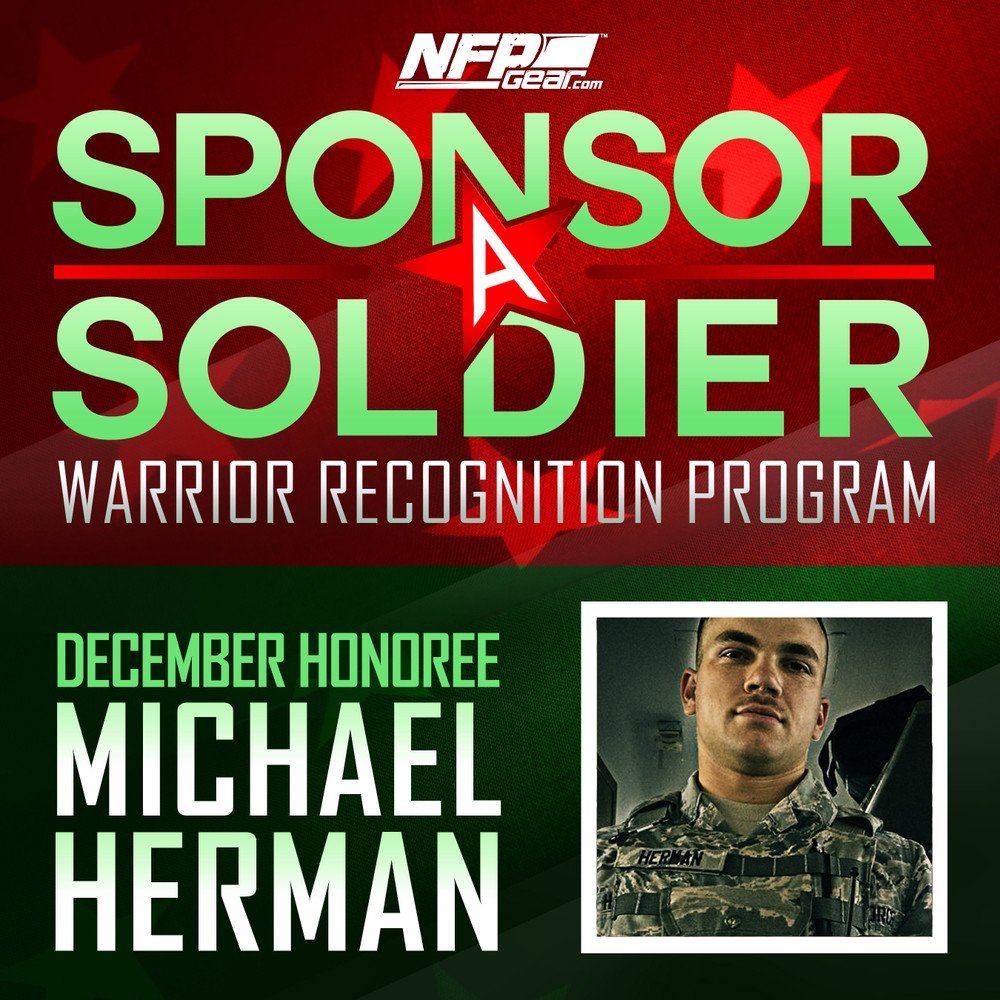 This year, thousands of Christmas trees are adorned with very special ornaments. They're not porcelain cartoon characters, wooden elves or delicate angels, but rather simple yellow ribbons.

These yellow ribbons represent honor and sacrifice of the highest order: service members serving their nation away from home.

This holiday season, as you unwrap presents and pour the egg nog, remember that many families are gathered around the Christmas tree with one member missing. These men and women have sacrificed their own holiday at home to give you and yours the greatest gift of all: freedom.

Fortunately, our final Sponsored Soldier of 2016 is home with his family this holiday season. However he's gearing up for a deployment in the coming months.

December's Sponsor A Soldier honoree is Airman First Class Michael Herman, who currently serves in the US Air Force.

A1C Herman's motivation for joining the Air Force stemmed from his desire to provide stability for his family while serving the greater good.

"[I wanted] to serve something bigger than myself, A1C Herman said. "Now, being a father, I want to give my son the best life that I can."

Currently, A1C Herman serves as an Airman in the USAF Security Forces at Lackland Air Force Base in Texas. In the future he hopes to become Airborne and Air Assault qualified. He is also considering a transition to the Army National Guard in the future.

The team at NFP Gear wants to thank A1C Herman and all those who have served. In 2016, we have had the honor and privilege of acknowledging the service and heroism of just a handful of our Nation's heroes. Before the Sponsor A Soldier initiative, our patriotism ran deep. However, after hearing the stories and seeing the faces of service men and women from ever corner of the country, we are evermore humbled by the character of these individuals. They serve our country daily without demanding the accolades they so deserve. We could not be more thankful for their courage and commitment.

We would also like to thank the families and friends who took the time to send along the emails nominating our services members. You gave us a glimpse into the lives of our military through your touching stories and words of love and admiration.

Finally, thank you to those of you who have followed the Sponsor A Soldier initiative. Every time you read the blog, shared a picture, or clicked a link, you showed our service members that they are valued and that their sacrifice is honored by their countrymen.

If you would like to read about the other Soldiers, Airmen, Sailors, and Marines we have featured this year, please follow the links below.