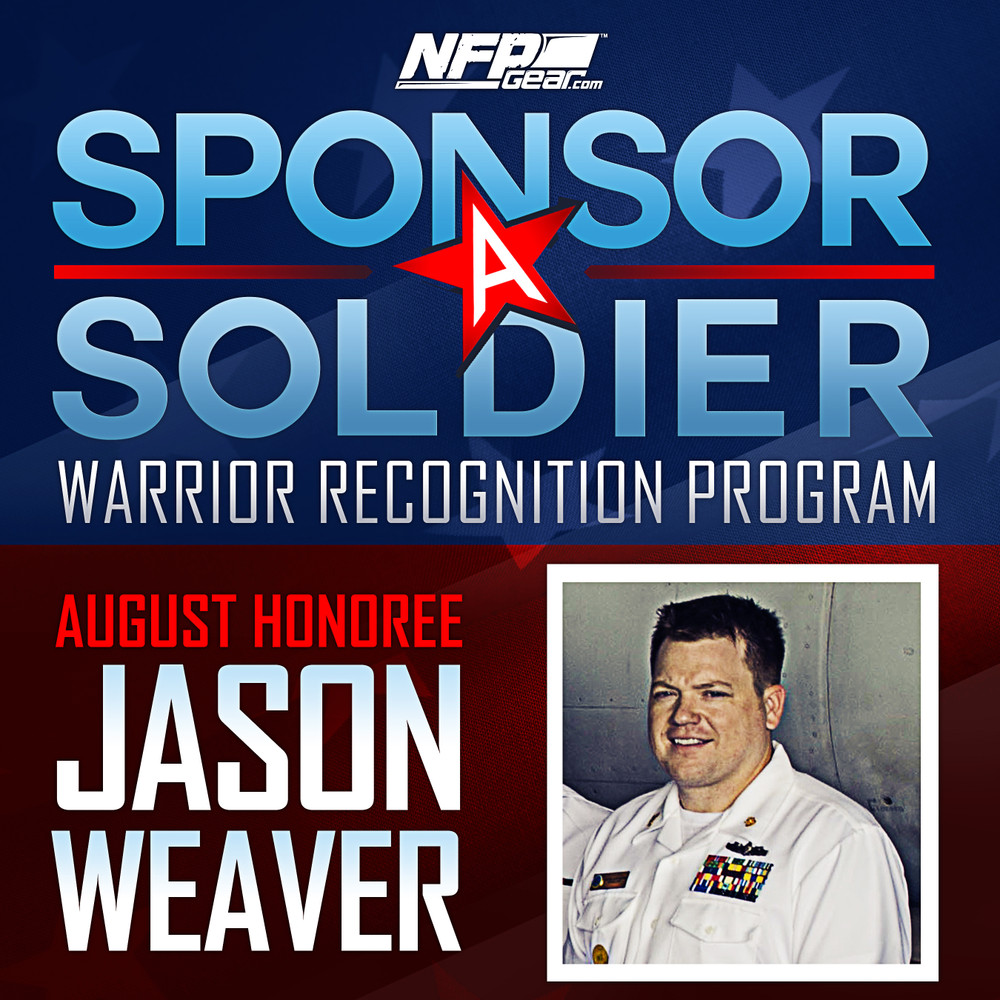 It’s not often NFP Gear has the privilege of sending a care package to a floating ZIP Code. However, we had the opportunity to do just that when we sent supplements and apparel to August’s Sponsor A Soldier honoree, US Navy Chief Petty Officer Jason Weaver.

Chief Weaver is currently serving aboard the USS Dwight D. Eisenhower, an aircraft carrier deployed in the Persian Gulf in support of Operation Inherent Resolve.

Prior to selecting Chief Weaver as August’s honoree, everything we knew about Aircraft Carriers, we learned during the opening scenes of “Top Gun.” After some research, we’re able to give you a glimpse into what life on an aircraft carrier is really like for Navy Seaman like Chief Weaver.

First off, this boat is massive. Ships like the “IKE” are some of the largest in the world. To give you an idea, Weaver’s aircraft carrier weights 95,000 tons. It boasts two 60,000 pound anchors that are held by enormous chains. A single link on these chains weighs 365 pounds.

The total area of the flight deck of the USS Dwight D. Eisenhower is 4.5 acres, which would cover about the same area as four football fields. While that may seem like a vast area to get out and stretch your legs, the flight deck is full of hazards. Because of this, much of the crew will spend weeks at a time below deck.

Below deck, the 6,000 men and women on board operate the USS Dwight D. Eisenhower like a city. The carrier has many of the same amenities including a hospital, post office, barber shops, gyms, chapels and more. These ships are equipped to be self-sustaining for months at a time.

While the ship is huge, the quarters are quite tight. The Seamen on the ship have to scale nearly vertical stairways between the 18-or-so levels and the narrow corridors of each floor are a tight squeeze. The berthing compartments (sleeping quarters) might be crammed with up to 60 other people, who might all be sharing the same bathrooms and common rooms.

This way of life might seem foreign to some, but for many who have chosen to serve in the US Navy, the aircraft carrier is their home -- and it’s full of family.

Currently in his 14th year of service, Chief Weaver is no stranger to this way of life. Currently, he serves as Chief Engineman on the aircraft carrier. On this large ship, it’s no small task. Enginemen operate, service and repair the engines that power Naval ships. Without men and women like Chief Weaver, the “IKE” would, quite literally, be sunk.

While he’s been in the Navy, Chief Weaver’s accomplishments include receiving a Bronze Star for actions while serving in Iraq. He also says being selected, tested, and pinned as a Chief Petty Officer was one of the “most memorable moments so far.”

Chief Weaver was nominated by fellow Seaman Austin McNeill, who is also aboard the USS Dwight D. Eisenhower. McNeill boasted that Weaver was “a good example to follow as leadership in the military.”

Chief Weaver, it seems McNeill has hit the nail on the head. NFP is proud to support courageous leaders like you, who consistently lead our Naval fleets to victory. So, for all you have done and will do for our nation and for the Seaman under your command, we thank you wholeheartedly.

You can read updates, view pictures and leave messages for the crew of the USS Dwight D. Eisenhower by visiting the vessel’s Facebook page. You can also find up-to-date videos posted on the “IKE On” YouTube channel.